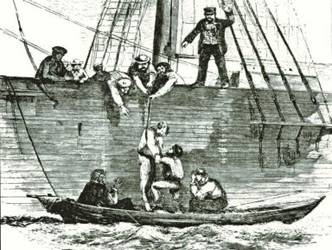 How the shanghaiing business worked
​The term “to shanghai” was coined by a preacher in San Francisco, in 1855 — the height of the Gold Rush. The term referred to a particularly aggressive form of a practice known as “crimping.”
The term “Crimping” comes from a Dutch word, “krimp,” a holding pen or tank for live fish. The basic idea is, you set up a boardinghouse for sailors where they can stay on credit while they’re ashore. That way, more of their money is available to spend on debauchery. Eventually, the sailor’s money is all gone, and he is simply living in the boardinghouse — still on credit. He repays that credit by shipping out when the boardinghouse operator gets an “order” from a ship captain who needs a crew member. When that happens, the boardinghouse operator places the sailor on an outbound ship, presenting a claim against his future earnings to cover his room and board.
Rarely though did the sailor go willingly back to sea — they always wanted to stay on land just a little longer. So often times the sailor had to be rendered unconscious with a shot of whisky laced with laudanum.
The grateful ship captain would then pay the crimp a bonus of $30 to $90 per sailor, depending on market conditions. This bonus was popularly called “blood money.”
This was what you might call “normal” crimping — a system designed to manipulate sailors into incurring debt that they could only discharge by making slaves of themselves. It was certainly bad enough … but shanghaiing was worse.
Systematic kidnapping
Shanghaiing was like freelance crimping. Rather than selling off sailors he’d enticed into his boardinghouse and encouraged to run up a debt, the crimp would simply prowl the streets with a blackjack looking for some stranger to clobber, roll up in a tarp and cash in.
Shanghaiing had certain advantages; the up-front costs, obviously, were quite a bit lower. It’s not the way most crimps liked to operate though, because it was dangerous and left a trail of deadly enemies — who occasionally returned to the port years later with revenge on their minds. Also, skippers didn’t much appreciate finding out that the “old salt” they’d signed on was a 19-year-old plowboy who’d never been on the water before.
But at times when there weren’t very many professional sailors in town, desperate ship captains would start raising the “blood money” bonuses they offered. The higher these bonuses got, the more tempted crimps were to fill their pockets with knockout drops and go out looking for someone to shanghai.
Astoria in particular seems to have presented the crimps with this sort of dilemma frequently, to the point that they resorted to some desperate measures to try to get crew members. 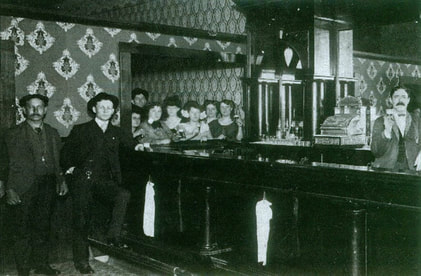 4 Stories about Shanghaiing
The year is 1877, and twenty year-old Richard Lewis opens his eyes, trying to place himself in what feels like a dark, damp cave. The last thing he remembers is having a great time at the Astor Saloon. Just as Richard was getting ready to head to his boarding house for a good night’s sleep, the barkeep at the Astor Saloon poured a round of whiskey shots for everyone in the tavern, on the house. Richard hears men’s voices and realizes that wherever he is, he’s not alone. If he could just get the room to stop swaying…

Shanghaiers make house calls
Historian Martha McKeown recounts the experiences of one newcomer to Astoria, Mont Hawthorne, who came to the city in the early 1880s and took a job cutting timber. Hawthorne was immediately warned by a neighbor to be on his guard. It seemed another neighbor had been kidnapped in the middle of the night, out of his own cabin, and hauled down to the waterfront and shipped out on a windjammer.
Accordingly, Hawthorne took to lugging a rifle and a shotgun with him at all times when he was in the woods. He also packed a revolver on his hip when he had to go to town.
Then one night, he was awakened by a huge racket at the door of his cabin. Someone was trying to force it open.
Hawthorne bellowed a warning, which was ignored, so he put seven rifle bullets through the door. After that, he heard a great crashing through the brush — audible, it seems, even over the ringing in his ears from having laid down a curtain of fire in an enclosed cabin — as the crimps beat a hasty and panicky retreat. They never bothered him after that.
​
Next is a minister’s shanghai story
A couple of shanghaiiers made an attempt on the Astoria’s Methodist minister, George Grannis. According to Dillon, Grannis went one Sunday to ring the bells in his church. On his way back down the stairs, someone suddenly stepped up behind him and threw an overcoat over his head, while another pinned his arms to his sides.
The would-be shanghaiers surely thought this would be a doddle. How hard could it possibly be to kidnap a preacher? Clergymen are the “turn-the-other-cheek” people — soft of voice and tender of foot. After all, who ever heard of a trained, successful prizefighter deciding to quit the ring and become a Methodist minister? Preposterous, right?
Grannis kicked out at the place in space which he was pretty sure contained one of his assailants, and was rewarded with the feel of a solid hit. The other one then lost his grip enough for Grannis to get a nice productive head-butt in. The three of them tumbled down the stairs to the bottom, and when they got there, Grannis was on his feet and moving like a pro. A few violent, painful seconds later, his assailants decided they’d bitten off more than they could chew and ran for it.
The next day, Grannis noticed one of the local crimps was missing a few teeth. And after that day, he was left in peace to minister to his flock.
courtesy of http://www.astoriaoregon.com/astoria_most_wicked.php ​
& offbeatoregon.com/shanghaiing trade 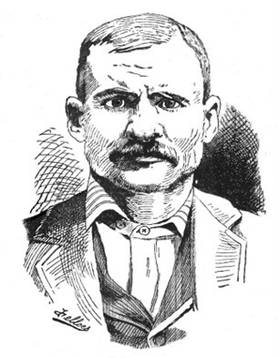 Last is the story of Bunco Kelly
In 1891, 21 year old Aquilla Ernest Clark was a victim.  He was invited to a party aboard the steamboat Iralda by his new friend Mr. Smith. By the time they reached San Francisco, Aquilla, being drunk, was tricked into signing the ship's articles for the barque T.F. Oakes. By signing it, Clark had changed careers. No longer a farm boy, he would not see Astoria again for 7 years. He was a sailor now, like hundreds of others in 1890s Astoria, he'd been Shanghaied.  By some accounts, many believe that the Mr. Smith in this story was no other than Joseph 'Bunco' Kelly. By far the most colorful of these crimping (shanghaiing) tales invariably involve a squat; steely-eyed Liverpudlian (from Liverpool) named Joseph "Bunco" Kelly (left). The Da Vinci of crimping, Kelly's nickname is a testament to his shanghaiing artistry.
Kelly's most famous ruse garnered him-and Astoria's waterfront- a rather infamous international reputation. One somber October night in 1892, when combing the streets of Astoria for 10 men to flesh out the crew of The Flying Prince, Kelly spied an open sidewalk trap-door on 8th and Bond St. Upon climbing down a steep ladder, he came across 12 apparently deeply inebriated fellows in a candle-lit cellar, moaning and gasping. The acrid stench of formaldehyde permeating the chamber quickly led Kelly to deduce that these men had mistakenly broken into the basement of what they thought was the Astor Saloon (recreated in the Heritage Museum) next door, but was in actuality the cellar of Johnson & Son undertakers. Thinking the cellar was a part of the Astor Pub; the men had each consumed cups of embalming fluid, which they had mistaken for liquor. When Kelly found them, several had died and others were dying.
Never one to miss an opportunity, Kelly hurried out of the cellar (closing the door behind him to avoid pesky fresh air from reviving his besotted booty) to fetch some goons to help him transport his expiring merchandise. Claiming the dead were merely unconscious from too much drink, Kelly sold all 12 to a captain whose ship sailed before the truth was discovered. The captain, after relaying that he had "never seen so many dead drunks in his life," shelled out $50 each for the 7 corpses and 5 severely ill men Kelly had delivered unto him.
The next day, the first mate of the Prince made the ghastly discovery and the ship proceeded to dock and unload its carrion cargo, causing an international uproar that started an international investigation centering on Astoria's crimping practices.
**Parts of this well-known story may be fictional.
Richard, Mont, George and Aquilla and a young man named Carroll Beebe, like thousands of men who passed through Astoria between from 1850 to the 1940s, were victims of shanghaiing – the practice of sending unwilling men out to sea, usually to serve on ships lacking full crews. In addition to being the oldest American settlement west of the Rockies, Astoria’s streets tell tales of its rowdy adolescence as a fishery hub in the late 1800s. Visitors today can still go to many of the scenes of the crimes, literally, that earned Astoria its reputation as what one late 19th-century reporter called “the most wicked place on Earth for its population.”
Astoria was established as a major shipping port and fishery hub due to its location at the Columbia River/Pacific Ocean estuary. Fishing near the mouth of the Columbia River offered sizable rewards, but was accompanied by great risk, attracting a large transient population that spawned the growth of saloons and brothels and contributed to the city’s unruly nature. Let us be your guide for revisiting and reliving the dastardly scenes.
The first stop on your tour through Astoria’s wicked history has to be the Clatsop County Historical Society’s Heritage Museum. A gallery on the second floor of the museum is dedicated to Vice and Virtue in Clatsop County: 1890 to Prohibition, where you can view artifacts from the time period and try your hand at a game of roulette in the partially-reconstructed saloon.
On the north side of Commercial Street between 14th and 15th Street, just up the street from Fort George Brewery, was once Bridget Grant’s seaman’s boarding house. Bridget ran a booming business for close to 30 years, and was well known by the locals for shanghaiing.
Jim Turk, who is often credited as the man who brought the whole Shanghaiing scene to Oregon, had a nearby seaman’s boarding house on the south side of Commercial Street between 15th and 16th, in what is now the parking lot for the Roby’s furniture store. Jim Turk’s business was a family affair, with he and his sons engaged in the shanghaiing business from Astoria to Portland. ​
And if you plan your Astoria trip during summer/early autumn, you can get wrapped up in a theatrical representation of Astoria’s history of shanghaiing at the Astor Street Opry Company’s annual vaudeville performance, Shanghaied in Astoria.
From the safety of your couch or while sipping a beverage at one of our coffeeshops, visit Facebook and take a peek into Sara’s Old Photos. Here, you can flip through hundreds of photographs of the Lower Columbia River region from as far back as the early 1900s.  Sara has some of her collection available at Phog Bounders Antique Mall, at 9th & Marine Drive, Astoria. It’s a perfect starting point before making your way through downtown, where you can then appreciate how the city has changed, while still bearing semblance to its wicked roots. ​

Gambling
Along with shanghaiing, gambling was an especially prominent practice in Astoria-Warrenton. An examination of the citation records from the 1890s to early 1900s reveals that the city’s “wicked” activity wasn’t just at the hands of transients, prostitutes or saloon owners. The records show that gambling repeat-offenders were generally fined once per month, around the same time and amount. Rather than discourage law-breaking, this system essentially makes a business out of it, with gambling offenders paying a small monthly fee to the local authorities.