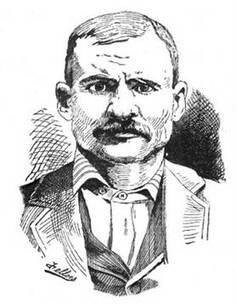 By far the most colorful of these crimping (shanghaiing) tales invariably involve a squat, steely-eyed Liverpudlian named Joseph “Bunco” Kelly. Perhaps the Da Vinci of crimping, Kelly’s nickname is a testament to his shanghaiing artistry.

Kelly’s most famous ruse garnered him—and Portland’s waterfront— a rather infamous international reputation. One somber October night in 1892, when combing the streets of Portland for 20 men to flesh out the crew of The Flying Prince, Kelly spied an open sidewalk trap-door on Second Street and Morrison. Upon climbing down a steep ladder, he came across 24 apparently deeply inebriated fellows in a candle-lit cellar, moaning and gasping. The acrid stench of formaldehyde permeating the chamber quickly led Kelly to deduce that these men had mistakenly broken into the basement of what they thought was the Snug Harbor Saloon next door, but was in actuality the cellar of Johnson & Son undertakers. Thinking the cellar was a part of the Snug Harbor Pub; the men had each consumed cups of embalming fluid, which they had mistaken for liquor. When Kelly found them, several had died and others were dying... Never one to miss an opportunity, Kelly hurried out of the cellar (closing the door behind him to avoid pesky fresh air from reviving his besotted booty) to fetch some goons to help him transport his expiring merchandise. Claiming the dead were merely unconscious from too much drink, Kelly sold all 24 to a captain whose ship sailed before the truth was discovered. The captain, after relaying that he had “never seen so many dead drunks in his life,” shelled out $50 each for the 14 corpses and 10 severely ill men Kelly had delivered unto him... The next day, the first mate of the Prince made the ghastly discovery and the ship proceeded to dock and unload its carrion cargo, causing an international uproar that started an international investigation centering on Portland’s crimping practices.

In a series of articles written by author Stewart Holbrook for the Oregonian in the early thirties, Holbrook attempted to trace these hardly halcyon days by interviewing a couple of Portland old-timers who had experienced our city’s rampant shanghaiing subculture first-hand.
One of these men, Edward C. “Spider” Johnson relayed stories of two crimp kings, Jim Turk and Larry Sullivan, who—while not as colorful as “Bunco” Kelly—held considerable power over Portland at the turn-of-the-century.
Jim Turk is credited with two claims to fame: 1) he is generally believed to be the first man to introduce crimping practices to the Oregon Coast in roughly 1870 and 2) he shanghaied his own son for blood money. Turk’s rather eccentric disciplinary measure was apparently a reaction to his son’s carousing, rampant womanizing and heavy drinking. Upon return from his deep-sea sabbatical, the young Turk was said to be “cured of his delinquency” and went on to become a successful businessman.
The elder Turk amassed a small fortune, owning boarding houses and hotels in both Portland and Astoria, and was also a bit of a fop, and could often be seen dressed to the nines, brandishing his gold-headed cane. Yet beneath this dandified facade lurked a quick-tempered pugilist, whose violent demeanor was even noted in a Portland Chamber of Commerce report: “The inhumanity and cruelty of James Turk towards seamen has never been denied by men who knew him.”
Larry Sullivan was an amateur boxer who opened a boardinghouse at the corner of Second and Glisan streets in the 1890s. His frequent boasts of being “king of the city” were not without weight, as despite a lengthy police record, Sullivan and Co. managed to manipulate the law into delaying ships from departing as well as tormenting disagreeable captains and rival crimps.
Described by Johnson as a “big shot,” Sullivan acted as a go-between between city officials and gambling institutions (some of which he owned) as well as acting as “ward boss” for local elections. Sullivan’s political involvement resulted in a spate of stories printed about the time of his death, one headline reading “Destinies of More than One Politician Swayed by Boarding House Man.”
An incident where Sullivan aimed a shotgun at police who came to investigate a polling booth in his boarding house during an election, attests his power in the community. After the polling, while police arrested him, no serious charges were filed against him. Later it was found that an entire crew of a Dutch ship were paid two dollars a piece by Sullivan to cast votes, despite their inability to read or speak English.
Another story had Sullivan setting fire to the feet of a sailor that he had drugged too heavily while attempting to crimp him. Although the case went to the Grand Jury, Sullivan cleared his name by paying $1,000 while the sailor died a short time later from the severity of his burns.
Another man who had an intimate shanghaiing experience with Sullivan was A.E. Clarke.
In Holbrook’s article, Clarke tells of the time that he was wandering down Burnside Street in October of 1891, when a friendly gentleman informed him of a riverboat party that his friend Larry Sullivan was putting on. The spirited soiree, which included women and free-flowing spirits, arrived in Astoria for what was promised to be an hour stay. Clarke was then told to sign a passenger list so that the crew would know when everyone was back on board. Sullivan then took Clarke and others on a “tour” of a massive, deep-sea ship called the T.F. Oakes. At that point, Clarke and Company were manacled at gun-point and shoved in a dark strong-hold. It was seven-years before Clarke saw Portland again. Clarke’s story is a nightmarish tale that makes Mutiny on the Bounty seem like an episode of The Love Boat.  In addition to malnutrition, countless abuses and indignities (not to mention really bad coffee), Clarke’s recollections include mad Captain Frost—whose collapsing mental condition resulted in the arbitrary execution of members of his crew—and the death of a tyrannical first-mate named Black Johnson, who “mysteriously disappeared” when, while heaving a jib that had gone slack, the crew simultaneously let go, causing Johnson to be jerked overboard. As he clung onto the rope, screaming, the crew pounded his fingers with an iron bar until he let go...