In eighteen fifty two, Portland was a raw frontier village and harbor.

The village clung to the banks of the Willamette centering here between Front St. and 1st St.
​
In 1852, here housed such enterprises as a Chinese laundry, a hotel, a foundry, a bakery and confectionary, a newspaper, a stove and tin store, a pharmacy and on the far right a dry goods, grocery, boots, shoes, liquors and more store.

This circa 1900 photo was copied from an original 1852 daguerreotype by Joseph Buchtel. It shows Front Street from Ash Street, (where we are parked now), with the docks in the distance.

Now, let's go to about 60 years later, along the waterfront.

Also see the adjoining picture, of the waterfront condition's in 1929, the same year the harbor wall was built.

In those days, riverfront docks were two-storied, with an upper level of dock's, warehouses and rooms for the workers, used during spring's high water. It's an early example of mixed use. Note the cast iron structures in the background.

​The lower levels became hangouts for shanghai men, who delivered unwary passersby for forced service on merchant ships to China.


Waterfront Park was established in the 1970s. Festivals held here throughout the summer include the Jazz festival, Blues, Oregon Brewers, Rose Festival, Cinco De Mayo festivals & many others.

By eighteen ninety four, Portland was a bustling port city, whose 2 halves on each side of the Willamette were connected by 4 bridges and the 3 towns of Portland, East Portland and Albina, were consolidated in 1891.

​As businesses moved away from the river, the areas grand old buildings were demolished.

One of the few surviving cast iron buildings along the waterfront, is the Smith Block, on the right, on the next block. It was built in 1872. Smith Block features a beautiful brick-and-iron façade restored to its original character, as well as exposed brick, custom wood windows, and a multi-floor glass skylight corridor inside.


The Smith Brothers, operated one of the many foundries, here in Portland.

​As demonstrated with the Ankeny Arcade, we miss those old buildings.

Take a look at this building in pictures.

See picture. Smith Block. Note that the left half of the building was demolished in 1955. 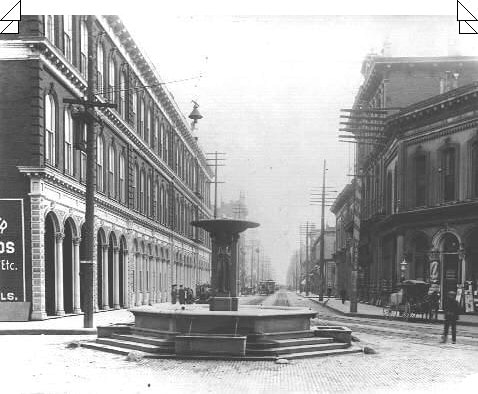 The addition of Waterfront Park along the harbor in the 1970s provided a place for strolling, recreation and many festivals.

To our left, UP AHEAD, is the main mast of the eighteen ninety three USS Oregon, all that remains of one of the world's most gallant ships.

NEXT IS THE USS OREGON