​ (Recommended 1 hour) Tour times are subject to volunteer availability, but are generally available: For the most up to date list of tour times please call 503-542-9306 on the day of your visit.
Alternatively, you may request the My Chauffeur guide through the garden for the price of admission.
EVENTS
Portland's internationally recognized Japanese Garden beckons visitors from home and abroad to enter its unique confines. Little more than fifty years old, it represents a melding of Japanese traditional garden forms with American hurry. When measured against its inspirational precursors in Japan, many of which are hundreds of years old, the Portland garden has come to a maturity with blinding swiftness.
The Garden was founded as a nonprofit organization in 1962.  Designed in 1963 by Professor Takuma Tono, an internationally renowned authority on Japanese garden landscaping, the Garden opened to the public in 1967 as a place of serene, quiet beauty.
Japanese gardens have an ancient history influenced by Shinto, Buddhist and Taoist philosophies. The combined emphasis of plants, stones and water are the essence of our Japanese Garden.
There are a number of concepts at work. Much is made of "borrowed scenery" principally the surrounding old-growth forest and remarkable vista across the city of Portland toward the Cascade Mountains and Mount Hood.  Also the concept of "hide and reveal”.  Plantings, placement of stones, and the route of pathways all give the Garden wanderer constantly changing views. The visitor does not gasp in awe of the Garden; the visitor instead is made reflective. The Garden is meant to calm, to soothe.
The Japanese Garden in Portland has its own personality reflected in five formal garden styles set on 9 acres: the Strolling Pond Garden, the Natural Garden, the Sand and Stone Garden, the Flat Garden and the Tea Garden.
Go and take a stroll with them . . . 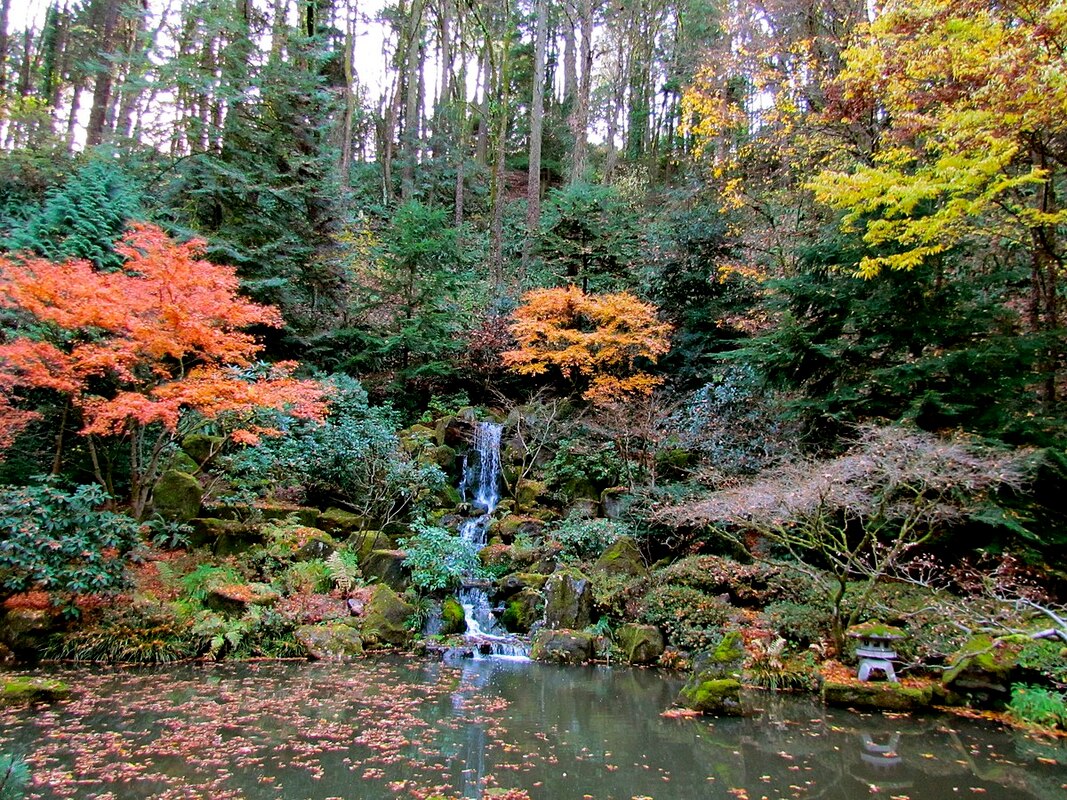 Strolling Pond Garden
(Chisen-kaiyu-shiki)
This is the largest of the Gardens. Step through the Wisteria Arbor, which was designed as a frame for the antique 5-tiered pagoda lantern given to Portland in 1963 from Portland's Sister City Sapporo, Japan. The stones at the base of the pagoda are in the shape of the island of Hokkaido, with Sapporo designated by a red stone. The Upper Pond features crane sculptures and is crossed by the authentic Moon Bridge. Walking south the visitor strolls by a creek and comes to the Lower Pond, which holds tortoise and crane stones - common symbols of longevity. The Zig Zag bridge leads through the famed iris beds which bloom in late June. The Heavenly Falls is the final stop in the Strolling Pond Garden. It provides an aural and visual backdrop to the lower pond which holds more than 50 koi. While watching these playful creatures the visitor stands on seven large stones placed in the pavement: they represent the Big Dipper.

Natural Garden
(Shukeiyen)
Winding your way down the south hillside you come through the Natural Garden. Here you will discover ponds, waterfalls and shallow streams as they meander under tiny ridges. Trees, shrubs, ferns and mosses grow in their natural state. Along the path visitors will come upon a small bas-relief figure, the only human form in the Garden. It is called a jizo statue representing Bodhisttava who was to watch over people after the death of Buddha. The Japanese jizo represents a kindly and protective deity. In many ways the Natural Garden is the most intimate of the five Gardens. Symbolic of the spiritual journey of life this is a place where the visitor is enclosed in an envelope of plantings, running water and views that change with each step

(Hiraniwa)
The Flat Garden is one of the earliest manifestations of garden design in Japan. Flat Gardens are mostly found in confined areas in cities making our Flat Garden example unusual in its expansiveness. This is a Garden that includes Shirakawa Sand raked in careful patterns representing water. It contrasts grass and moss, along with plantings of evergreens and flowering azaleas all balanced against the contrast of white sand. Amidst the seascape sand are two shapes - a gourd and a sake cup - made up of low-growing plants. These two forms connote pleasure; spiritual and temporal. The circle, which represents the sake cup, also has deep Buddhist significance of enlightenment. The gourd represents happiness. The Pavilion looks out over the Flat Garden to the west and visitors often meditate under the eaves of the roof.

(Karesansui/Zen niwa)
The most abstract of the Japanese Garden forms. It features the stark simplicity of weathered stones rising from a bed of sand ripple raked to suggest the sea. This garden style is typically found in Zen monasteries.

​The Tea Garden consists of inner and outer gardens, connected by a pathway [roji] that leads to the Kashintei Tea House. The outer garden path [soto-roji] stops before the waiting place [machiai]. Here, the tea ceremony host would greet visitors and invite them to walk the inner garden path [uchi-roji]. Guests would pause at the water basin [tsukubai] to rinse their hands and mouth, symbolically removing the dust of the real world behind. The pathway through the gardens represents a journey so integral to the Japanese tea ceremony that the word roji has become synonymous with tea gardens themselves.