Portland History:
Today Portland's Old Town encompasses roughly the first three blocks west of the Willamette River, from the Burnside Bridge area south to the Morrison Bridge. Many of the 19th-century stone, brick and cast-iron-fronted buildings are lively pubs, but not as many as in the 1870s, when Portland had one saloon for every 40 inhabitants.
This is the historic core of Portland, once upon a time a rough-and-tumble waterfront where sailors and loggers went carousing in the muddy streets. Some claim it was the source of the term 'Skid Row'-the expression refers to the path along which cut logs were ushered toward the river. In those days, this area flooded several times a season. (& before the sewer system was installed, so you can imagine). Old town is also home to the legendary Shanghai Tunnels, where drunken sailors would be dropped into tunnels below bars , then dragged aboard ships as slaves or indentured servants.
Old town suffered from neglect and was considered pretty sketchy until a few years ago, when the city helped revitalize the neighborhood. There are obviously gritty elements, but Old Town and Chinatown tend to be lively at night with many entertainment options.
Part of this part of town's appeal is its old architecture. In particular its character-rich brick and cast-iron buildings--in fact, Portland has the 2nd biggest collections of historic cast-iron in the country, only surpassed by Soho New York. Preservation efforts beginning in the 1970s helped to keep alot of the city's historic charm intact. 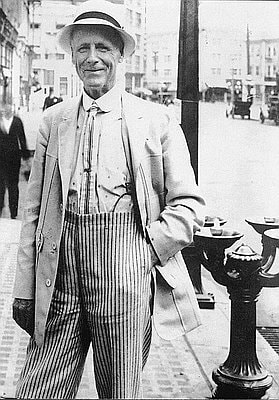 ​​I came out West for change and rest;
But the whores got my change,
And Erickson's got the rest"
​That's quite poetic.

Erickson's Saloon – get drunk and get Shanghaiied SEE PLACARD
VIEW IN NEW PAGE
In 1913, Portland's population was 276,000 people. The city changed from its mud, blood and beer dominated early days, to the newer, gentler Portland with Benson's Bubbler's and the sweet-smelling Rose Festival. This great city that we know today was a river town whose beginnings we often look upon as being nothing more than a humble Victorian settlement... But this "split-personality" Portland was one of the busiest ports on the globe in the early 1900s, and it happened in spite of the colorful types who resided here...
Walking around today you would never know it, but the next time you're having a nice quiet pint at Kelly's Olympian, Dan & Louis's Oyster Bar or Erickson's Saloon, take a look around... the place you're relaxing in was, not too long ago, the most dangerous place in America to go out drinking. Today Portland is amongst the countries most desirous places, but it secretly harbors an underworld darker than you can possibly imagine...
100 years ago, this vice-filled city was a Wild West port town and had more dark places than any medieval dungeon... where gambling, drugs and murder were on every street corner, and you could be kidnapped and sold into slavery. It was easy to find a good time with Speakeasies, brothels and drug dens and you could get anything in one of the edgier neighborhood saloons --including shot, stabbed, clobbered, swindled, stupefied with opium, knocked out with chloroform, infected with syphilis, poisoned with bad moonshine or shanghaied by crimps with trap doors called 'dead-falls' used to kidnap unsuspecting victims.... Today Portland's seedy past is buried beneath its streets.
The shanghaiing trade is over largely because of the disuse of sailing ships and because of an event which caused an international uproar that started an international investigation centering on Portland's crimping practices...
The Tales of the crimps Bunco Kelly, Jim Turk & Larry Sullivan

​In the Ankeny St alleyway, several bars share the block. Drink at your own risk--but this is a fun and lively warm-weather hangout, and the bars are all worth checking out if its too cold outdoors. At the corner is Voodoo Doughnuts, with its huge line outside. Go ahead, i'll be here in the alley.
​The Wachsmuth Building -
Built in 1892, is an Italianate structure & was the location of the original Wells Fargo Express Co. from 1873-1894 and Portland's 1st telephone exchange with 5 operators handling all the calls.

Dan & Louis Oyster Bar
Since 1907 the legendary shellfish restaurant is famous for its oyster stew and clam chowder. The interior is as fascinating as the food is good, the theme of ocean & ships, walls adorned with china plates, ship models and collectibles from around the world.
The Hasseltine Building (1893) -
Defined the edge of old Chinatown and Portland's original commercial core to 2nd ave.
Originally a storage warehouse and hardware store, it is a fine example of transitional architecture in the Richardsonian Romanesque style between the era of cast-iron, 1851-89, and high rise structures built after the 1900s.
And August Erickson was not a man to let a little deluge slow his business. So when the Willamette River’s “Great Flood of 1894” hit Portland 125 years ago, Erickson moored a houseboat in the middle of W Burnside Street. Patrons rowed up in little boats, homemade rafts, and even caulked packing crates for shots of whiskey and to meet ladies.
Portland's Oldest Building 1857 -- Hallock-McMillan Building (237 SW Naito); the first and oldest commercial brick building in downtown Portland, currently being restored to original.
In 2010, Portland developer John Russell purchased the building for $700,000. In 2011, Russell announced his plans to restore the building's exterior to its original appearance. Plans include three "graceful" Romanesque-style cast iron arches on the first floor and partial arches above the second floor's windows. Exterior renovation plans must be approved by the Portland Historic Landmarks Commission.

Union Station – 1896- "Don't miss the train"  Originally the brainchild of Henry Villard, a businessman who controlled the Oregon and Transcontinental Company, and the original designer of the Portland Hotel.  Villard organized the Northern Pacific Terminal Co. to construct and operate a railroad station in Portland.He went bust before his plans could be completed. A more modest version was eventually built. It's now owned by the Portland Development Commission.
Japanese Garden